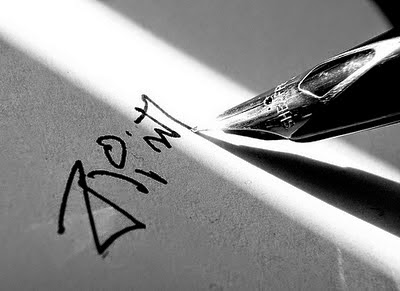 Bangla, being a member of the Indo-Aryan languages, is derived from Sanskrit, and hence appears to be similar to Hindi. It is written left-to-right, top-to-bottom of page (same as English). Vocabulary is akin to Sanskrit, and whilst it is quite difficult at first, there are to some extent similarities with Latin aswell. [1]


Bangla vocabulary shows many influences. In Bangladesh there is obviously a strong Perso-Arabic influence due to Islam. This is seen in the greetings of "Salaam aleykum" (Peace be unto you) and the reply "Wa aleykum as-salaam" (Unto you also peace) as well as "Khoda hafez" (God protect you), the choice of names (Muhammad, Tanvir, Khaleda, Fatema), the names of family members "abba" (father) and "amma" (mother). Interestingly, the subsequent trade routes between the Arab world and the home of the Moguls led to words such as "dokan" (shop), "tarikh"(date), "kolom"(pen) and "bonduk" (gun) entering Bangla. The etymology of Bangladesh's second city, Chottogram, is of linguistic interest. Known as "Shatt' al-Ganga" (Arabic for "mouth of the Ganges") by the Arab traders who patronized the route prior to the discovery of India by the Europeans, the British anglicized the name to Chittagong.

In West Bengal the language situation is somewhat different. Being predominantly a Hindu state, the Hindu greeting is "Namashkar". The way of addressing family members is somewhat different also: "ma" (mother), "baba" or "pita" (father). However, it is in the case of "dada" that confusion arises. For Muslims "dada" is paternal grandfather whereas for Hindus it is elder brother.
Whilst other cultural differences include "goshol kora" (Bangladesh)/"snan kora" (West Bengal) meaning to bathe, "shathey" (BD)/"shongey" (WB) meaning with, "pani" (BD)/"jol" (WB) meaning water and "lobon" (BD)/"nun" (WB) meaning salt [2], these prove not to be an obstacle to learning Bangla. They are simply something to be aware of just like "lift" (GB English) and "elevator" (US English).  A strong influence of English in Bangla is easily noticeable. Primarily, during the days of the Raj many words of English origin such as "tebil" (table), "tiffin" (archaic in modern day English meaning snack box) entered Bangla. In more recent time the ever rising global nature of English has lead to words such as "television", "telephone", "video" and "radio" being adopted by Bangla. However, unlike India, there has never been the need for English as a lingua franca and thus Bangla is the state language of Bangladesh. 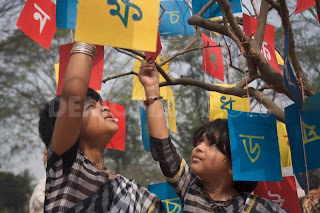 Culturally, Bangla is very close to the hearts of Bangladeshis. There is without a doubt many reasons for this: following partition (1947) of India and the departure of the educated Hindu classes in the administration, the Bangladeshi intellectuals felt the need of Bangla as a means of identifying their culture and nationalism. This is exemplified by the fact that Bangla was crucial in precipitating the events of the Bangladeshi War of Independence (1971) for the following reasons.


The partition of British India led to the creation of India and Pakistan. Pakistan - a country made of two regions physically divided by the land mass (1600 kilometers) of India, yet theoretically united by religion (Islam). However, the differences between the predominantly Urdu speaking province (West Pakistan - modern day Pakistan) and that of the predominantly Bangla speaking province (East Pakistan - now the independent state of Bangladesh) were great.

The uniting factor of Islam was to prove not enough to overcome the economic, political and social differences. The differences and inequalities of the West Pakistani administrative centre stirred up a sense of Bangla nationalism which the Muslim League - in its desire to create a Muslim homeland and so end Hindu dominance - had not calculated. The economic, political and social inequalities were exacerbated with time.

The Pakistan government's declaration that `Urdu and only Urdu' would be the national language led to a language movement which quickly became the Bangla national movement. The death of 12 students who were killed by the Pakistani army during the 1952 riots in Dhaka is commemorated by a stark statue (Shohid Minaar - the martyr's tower) in Dhaka near Dhaka Medical College Hospital. The image of which appears on stamps and on the two taka note (See picture).

Bangla, like English, has distinct linguistic tracts. Whilst in English vocabulary of Anglo-Saxon/German stock is much more prevalent in everyday parlance, whereas words of French derivation are more educated and those of Latin stock show a further level of education as exemplified by the words: holy (heilig in German), sacred (sacré in French) and consecrated (consecrãre in Latin) a similar situation arises in Bangla.

As opposed to being a concept of the level of education, the distinct choice of word stock is more to do with a political/religious/social inclination. The words "nobo"/"notun", meaning new, are not interchangeable. "nobo" is used in auspicious circumstances hence to wish someone "Happy New Year" one says "Shubo nobo bosho", whereas "notun" is used in everyday language as exemplified by "I have a new car" renders "Ami notun gari achi". However, the word "victory" can be translated into Bangla in two ways. The choice of the word "joy" in proclaiming independence from Pakistan (1971) was crucial. For "joy" is a very Bangla word as opposed to "zindabad" which with its Urdu roots would have been a most inappropriate choice. 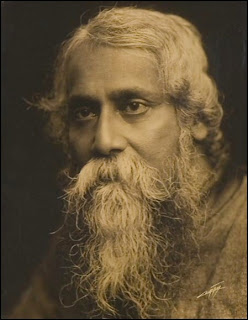 "Fear not, comes the message from
the direction of the rising sun,
Those that will give life to the last throb


will diminish not, never"
-Rabindranath Tagore-

Bangla literature dates back to the 12th Century. In modern times it was the first Indian language to show the influence of Western literary styles, and in 1913 the Bangla poet and philosopher Rabindrananth Tagore (1861 - 1941) was the first Asian novelist to receive the Nobel Prize for Literature. The award was for an English translation of his mystical poem "Gitanjali" (Song offerings).

Rabindra (Rabindranath Tagore, like all writers from the Indian sub-continent is known by first name, rather than by surname as is the practise in the West) besides being a literary artist, was the Indian subcontinent's greatest artist, an innovative musician (responsible for scores of songs including both the Bangladesh and Indian national anthems) and a social reformer.

Kazi Nazrul Islam's revolutionary poetry and sense of Bengali nationalism developped rapport with the Bengali Language Movement of the 1950's and 1960's which ultimately lead to the estblishment of Bangladesh as a sovereign state. In 1972 he moved from Culcutta to Bangladesh and was made the national poet.
Jasimuddin, is recognized as the embodiment of Bengali folk culture as his inspiration was derived from the life of peasant farmer, fishermen, boatmen and the wandering gypsies.

To start off with Bangla does not have the concept of upper or lower case letters. When learning Bangla it is best to try to get to grips with the alphabet as

(i) the sooner one learns the alphabet, the more aware one is of the complicated sound system which is nearly impossible to represent in Latin script;
(ii) the Bangla alphabet, unlike the Greek and Roman alphabets, is arranged in a logical fashion: Vowels first, then consonants (velars, palatals, retroflex, dentals, labials), semi-vowels and dipthongs and
(iii) transliterations tend to be very poor as most Bangla is transliterated via Hindi. Thus the implicit 'o' (after a consonant) in Bangla, is replaced with the implicit 'a' (after a consonant) of Hindi. This is best demonstrated with the famous Bangla author, film-director Satyajit Rai - a more appropriate transliteration of his name would be Shotojit Rai.

Dr. Hilali's "Learning Bengali" [3] has an introduction to the vowel and consonant system of Bangla, which whilst it is only a few pages, is comprehensive. The following information is intended to be a brief overview of Bangla.

As to the vowels there are eleven vowels in Bengali with seven sounds - long and short. All Bangla vowels can be nasalised by using the nasal sign called "chondrobindu" (meaning moon dot).

However, with the exception of the first vowel ("a") which has no signature and is always implicit in the consonant , they all change their shape when used with a consonant. The new shape, a signature (known in Bangla as a "kar"), then might proceed, come after, be around or at the bottom of the consonant.
As to consonants Bangla includes 39 characters. However, these 39 characters number no more than 29 sounds.


As one starts to learn words, begins to read letters and newspapers one comes across an array of letters not previously seen - conjuncts. These are the amalgamation of two or three sounds into one specific letter. Whilst in English for example "s" and "t" are two specific letters, which when said together produce one sound "st" and are written as two letters next to each other, this is not the case in Bangla. In the case of the word "London", the conjunct of "nd" is recognizable as the two letters are simply written on top of each other. However, in other cases, for example "bondhu" the resulting conjunct is a character which is hardly recognizable and needs to be learnt. 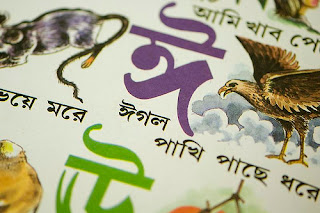 Grammatically, Bangla has some major differences from English. However, if one has previously studied foreign languages and has a concept of grammar we believe it is relatively easy. Like German, there are many impersonal constructions. When expressing coldness/hunger the expression is "amar thaan'da lagch'he" (Mir ist kalt) "amar khidaa legech'he" (Mir ist hungrig), which literally means "to me there is cold"/"to me there is hunger".

Like Slavonic languages there is not a separate word for "the" or "a". Therefore the word "desh" may render country or countries. While it is usually obvious from context/grammatical agreement etc.,. the addition of the suffix "ta" ("deshta") renders "the country". Similarly, if the word "ek" (one) appears before the noun, it is evident that it refers to "one country". However, where it is to be "ekta" ("ek" plus the suffix "ta") this would be indicative that it were this one specific country.  Punctuation, with the exception of the full-stop, is the same as English puctuation. The end of a sentence in Bangla is indicated by a "dari" (full-stop) which is a straight line running vertical to the last word of the sentence.

The State of Democracy and Political Freedom in Bangladesh [+] 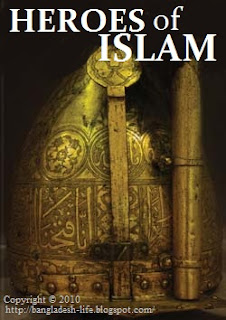